Introduction of the Sapphire, Superluminova indexes, and the new Rolex 3000 caliber based on the 3035. The mechanisms not having been tested by the COSC, the inscription "Superlative Chronometer Officially Certified" disappears.

This Rolex Submariner Ref. 14060 retains the same case specifications of the 5513 it replaced, but its movement is the calibre 3000, based on the new 3035 without the date function. 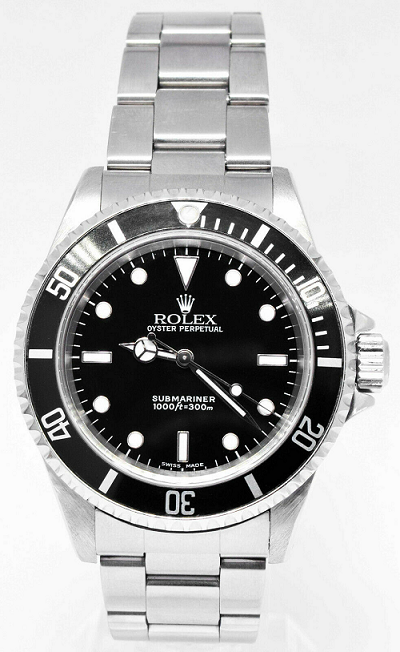 On the models of the late 1990's found an inscription added at 6 o'clock: SWISS-T/25 which means that the tritium component - phosphorescent products of the indexes and needles - has been changed for a less effective but easier to maintain and non-radioactive substance, called "Superluminova".

The addition of this new mechanism means that the reference changes to Rolex Sub 14060M (M for "Modified Movement"), so we will find, for the so-called peripheral elements (hands, dials, case, etc ...) the same specificities as the 14060.

Note that the 3130, like its predecessor the calibre 30000, is not COSC certified until summer 2007, so the dials equipping the 14060M produced from 2001 to summer 2007 do not have the mention "Superlative Chronometer Officially Certified".

The Submariner non Date is no longer produced nowadays, it was no longer presented at the Basel exhibition in 2011.

In relation to their historical value, the price of these watches is still very accessible, it is the most accessible Submariner since it can be found from 6000 Euros second hand. It is currently taking a lot of value, it is an excellent investment since they should be worth around 10.000€ in 10 years.

The simplicity of its dial with no date, and therefore no cyclops, reveals its charm day after day and could change the mind of any Submariner date aficionado.

Today, the non-date Submariner is less successful than the date Submariner, maybe wrongly because it is certain that these models will see their popularity skyrocket in a few years.

The discerning collector will tend to favor the acquisition of a 14060 or a 14060M produced from 2007 to 2010 with the name Chronometer and the inscription at 6 o'clock "Superlative Chronometer Officially Certified".