Discover our selection of the best Yema watches available online, pre-owned vintage Yema watches and new models.
Add this page to your favorites, if you like Yema wristwatches.

A selection of preowned YEMA watches

Vintage YEMA watches are traditionnally hard-to-find online. Our team is doing a daily selection of the most interesting pre-owned YEMA watches available on various websites online. We select rare YEMA wriswatches from reliable online dealers and serious watch collectors. Our knowledge of the luxury watch market ensures you a selection of scarce YEMA watches. Several collectors are in love with Yema vintage time-keepers due to the rich history of the Yema brand (see below). A Yema Yachtingraf Regate in mint condition can easily reach $2000. A vintage Yema Diver Chronograph would be more around $500. New Yema watches are now between $250 and $450 depending of the reference

How to get a Yema watch here ?

Nothing easier : you have found an old Yema watch you like, just click on it and we will automatically redirect you towards a merchant site where you can get it. If you have any questions about a Yema model, please send us an email.

YEMA : a mythical brand in horology

YEMA was founded in 1948 by Henry Louis Bermont in Besançon, the maintown of French horology in the Doubs. From the beginning Yema was producing specific chronographs for plane pilots, divers, car racers and moto racers. 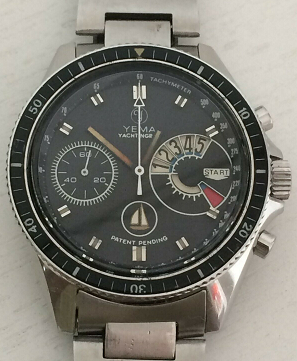 Yema watches from the 1950s

In the 1950s, Yema was using the movements with the best reputation (Venus 150 or Valjoux 92, 7733, 7734) as the famous Omega brand. Yema brands were reknowned for their excellent water-resistance, especially the range "Yema Sous Marine" which was of the first water-resistant French watch.

Yema watches from the 1960s

In the 1960s, Yema launched a new caliber : the HP60 that we find in the Yema MeanGraf, it was one of the first 20 ATM diving watches. The Yema Sous Marine Jour Date is from that period too.

Yema watches from the 1970s

In the 1970s, YEMA racing chronographs were as famous and popular than the ones from Omega, Rolex and Zenith. Especially the Yema RallyGraf or Yema MeanGraf which were huge successes. Yema also created a R&D department to develop their quartz models.

In 1982, it is the end of the best period for the brand, and Henry Louis Bermont's son sold the brand to the MATRA group.

In 1989 is launched the Yema Flygraf, a plane pilote wristwatch with a calculation rule necessary to chronometer the various phases of a flight.

In 1990, they launch the famous Yema Bipole for the explorator Jean-Louis Etienne and the Yema Yachtingraf Regate for the famous sailor Marc Pajot, leader of the French Team in the America's Cup regate.

Under the direction of Louis-Eris Beckensteiner, Yema brand is back to very high quality standards and has relaunched some classic vintage Yema watches like the Rallygraf in 2005, the Flygraf in 2006 and the Yema Yachtingraf in 2007.

2009 : a new Yema for astronaut, the Yema Spacegraf

In 2009, the Yema brand is bought by the French horology group "Montres Ambre de Morteau". In 2017, Yema is back to a strong cooperation with the European Spatial Agency and develop the Yema Spacegraf for the famous French astronaut : Thomas Pesquet.

The most interesting recent models of the Yema brand are the Yema Superman Heritage Blue and the Yema Rallygraf Chrono Black & Blue. Both references have a highly performing Swiss movement inside.