Rolex Comex : the history of a mythical watch

In the world of vintage watches, there are very few references more valuable than an authentic Rolex COMEX. Here is the story of this legendary timepiece.

The history of the partnership between Rolex and COMEX

Created in 1962 in Marseilles by Henri Germain Delauze, the Compagnie Maritime d'Expertise (better known under the acronym COMEX) quickly became a pioneer in industrial deep diving. Comex was particularly well known for its development in the oil and gas industry around the world. The Comex name is also associated, to some extent, with the name of Jacques-Yves Cousteau, in the context of the takeover of the Argyronète, with the SAGA project.
COMEX's moto: pushing back the limits of underwater work at extreme depths in perfect safety conditions and giving man the means to ensure the perfection of his work. Comex's numerous operations in the marine environment, such as pipeline construction and subsea exploration, have enabled it to set multiple diving records. Comex earned its letters of nobility with seasoned divers capable of diving to depths never reached before. Comex is the marine equivalent of what NASA is for space exploration.
It wasn't until the 1970s that the vision of the founder of Comex crossed with that of the Rolex company Indeed, under the initiative of Andre Heiniger, a partnership was formed between Rolex and the Maritime Expertise Company, with its divers being allocated a Rolex-stamped watch for their mission. This is the beginning of a long collaboration.

This fruitful collaboration has inspired Rolex to develop a mythical watchmaking innovation: the Helium Valve. Numerous tests were carried out in a hyper-bar housing of the Comex to improve it, up to the current version.
In order to differentiate between COMEX watches and those intended for the public, the watches of the partnership then carry several specificities. The first models (notably the Submariner 5514) have only a very discreet marking on the case back. The first versions then carry a dial indexes "painted" with Tritium. The last series from 2000 to 2004 have a dial indexes circled with Luminova. There are also Rolex Comex service dials, replaced during overhauls at Rolex. We can then notice a decrease in value in the auction results of the copies with such a dial. The front of the case back is engraved with a number, allowing the Comex to keep a record of the watches allocated to its divers (the typography and location of the engravings has varied over time). The serial number of the case struck on the lug is also engraved on the back of the case back (not visible). The traceability of a Rolex Comex with its first owner (usually a diver) must be exemplary. Indeed, many fake Rolex Comex circulate on the market of collector's watches. They are examples that have been assembled from scratch from recovered (or even counterfeit) dials or case backs. The certificate bears the prestigious mention "Comex S.A." , "S.A." is "Société Anonyme" in French and means "LLC".

There are two categories of Rolex Comex :

The Sea-Dweller
- 1665
- 16600
- 16660
This partnership ended in 2004 with the Submariner reference 16610 as well as the Sea-Dweller 16600 whose dial has the circled indexes. The serial number of this last production has then a serial number beginning with the letter F.

The collaboration between Rolex and COMEX is still in progress, especially through the hyperbaric tank specially developed by the Marseille company to test and develop the Rolex Deepsea.

Today, the Rolex COMEX are among the most sought-after pieces by collectors, particularly for their rarity and their great contribution to the myth of the Rolex diver.

An example of an authentic Rolex Comex watch

Mr Vittini, a famous French watch seller, has displayed on his social network an example of an authentic Rolex Comex 5514. 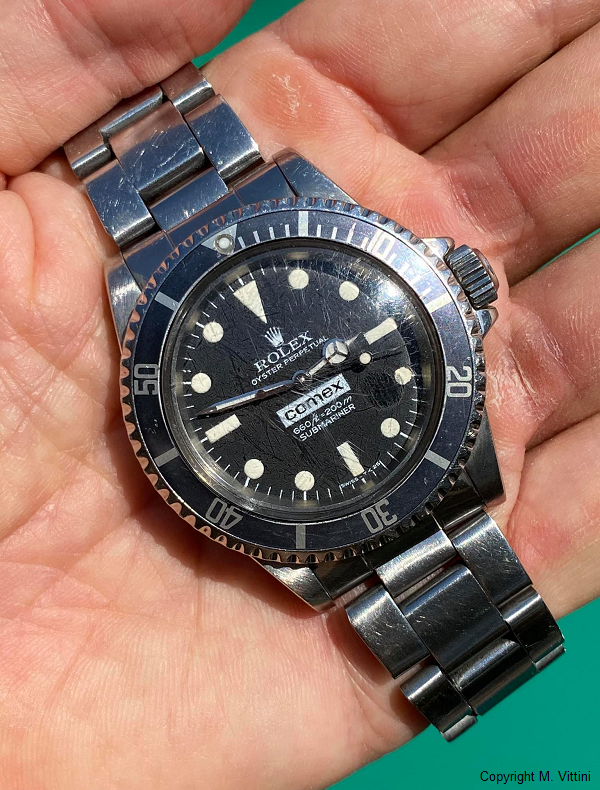 That exceptional Rolex Comex Submariner 5514 was owned by a diver and hyper bar technician of the Comex company, Michel Siffredi. He owned that watch since 1977. This watch with its owner has participated in the biggest deep expeditions with the most famous divers of the comex such as : Mavostromos, Icarus, Peyo, Guaide, Raude etc.