When everyone is looking for a Rolex 5513 or a vintage Omega Seamaster, the vintage watch collectors who wants something different are looking for a mythical model : the SAS Polerouter by Universal Geneve. This is the story of this great timepiece.

The history of the Polerouter by Universal Geneve.

We are at the beginning of the 1950s. The experimental flight of the Scandinavian airline SAS is a success. For the first time, in 1952, a plane succeeded in flying from Los Angeles to Copenhagen by creating a shortcut over the North Pole. What seems trivial today was no small feat at the time. A number of logistical and technical problems had to be solved, most notably the magnetic pole, which was disrupting the on-board navigation devices. Universal Geneve, which at the time was the official supplier of the company, had to specially adapt its watches to protect them from the magnetic fields of the polar region. The first commercial flight between Copenhagen and Los Angeles was inaugurated on November 15, 1954. The airport was crowded that day to celebrate the event. More than 10,000 people came out to see the DC 6 named "Helge Viking" (OY-KMI) take off, with journalists and the prime ministers of Norway, Denmark and Sweden on board. The flight will last a total of 27 hours and 15 minutes with a 3-hour refuelling stop in the Tundra in Winnipeg, Canada.

The watchmaking battle of the 1950s

In 1953, Rolex had just claimed Sir Hillary's success on Everest while Tudor was making a name for itself thanks to the British North Greenland Expedition (1952-1954). At the same time, Nivada was surfing on the prowess of the Deep Freeze Expedition to Antarctica (1955), while Enicar became the official sponsor of the 1956 Everest expedition with the Enicar Sherpa.  As for Omega, in 1957 it released three watches simultaneously, each of which differed from the others in terms of their function in different environments. These were, of course, the Omega Speedmaster, Railmaster and Seamaster trilogy.

We are thus at a pivotal period where the first toolwatches made their appearance before acquiring their letters of nobility through these exploits which founded the progress of science at the beginning of the 20th century.

Universal Geneve, which was especially recognized for the quality of its chronographs, should not be left behind. The brand called upon a young designer in his twenties, a certain Gerald Genta, to design the watch that would relaunch them thanks to the media success of the SAS.

Initially called "Polarouter", the first watches worn by polar flight crews had a calibre 138 SS which already dated from 1948. This winding system known as "Bumper", very common at that time, wound the barrel thanks to a shuttle which made the return trip between two spring stops. It will be replaced after one year (1955) by a new revolutionary movement called "Micro-Rotor" whose invention was disputed between Universal and Buren. The latter, for its part, had just launched its "Intra-Matic" which would later inspire the Chrono-Matic, better known under the name of Calibre 11. 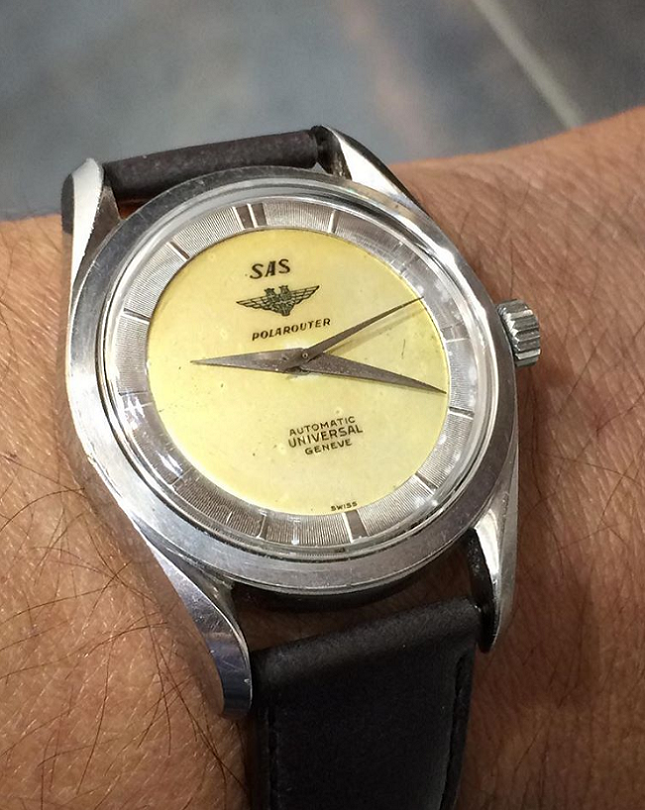 Universal Geneve's micro-rotor calibre 215 surpassed the bumper system in several respects: the micro-rotor had a better efficiency because it wound the watch in both directions of rotation of the rotor; whereas the stop system wound the watch in only one direction, having to return to its initial position each time. And last but not least, thanks to its reduced size, the micro-rotor was integrated directly into the movement, giving it a very thin design for an automatic, compared to the calibre with a traditional oscillating weight placed on the movement.

Sold at the same price as a Rolex Explorer at the time, Universal now owned its own "sport" watch. Namely a high-performance, compact (34.5mm) and refined watch, worn in all circumstances by the hyper-active modern man. Faced with the commercial success of the Polerouter, Universal will decline under this name countless iterations ranging from quartz models to "SUB" diving models with symmetrical and asymmetrical cases as well as a 42mm Super Compressor model! Of the fifteen or so existing models, the version designed by Genta with its "twisted" handles is of course the most iconic of all. Informed enthusiasts may prefer the "SUPER" models with straight handles, available from 1962 onwards, equipped with the most advanced version of the micro-rotor movement, the calibre 69 and its 55-hour power reserve. 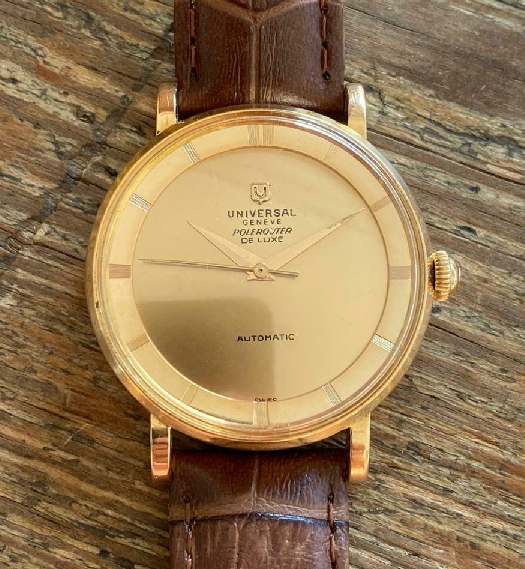 Last advice : it is high time to take a look at the Polerouter before the inflationary fever makes it untouchable. For a fraction of the price you will get a watch that is technically more advanced and historically more innovative than all the Explorer watches of the time. Some vintage Universal Geneve Polerouter are available from time to time in our UG page on Watch-Deal, check it regularly.