Gruen watches : the history of a mythical vintage watch brand

You will find on this page some information about the very interesting Gruen brand. Gruen is a very popular brand among vintage watch specialists. Discover the history of the brand, its founder and its first models.

Dietrich Grün, the founder of Gruen, came from Germany

Several European watchmakers, coming from European watchmaking basins, have attempted the adventure of crossing the ocean to conquer the New World. The German Dietrich Grün is one of them. An apprentice watchmaker in Switzerland in 1862, he was fifteen years old and no doubt already had many dreams in mind. Five years later, he emigrated to the United States and revised the spelling of his surname, which became Gruen. Falling in love with the daughter of a watchmaker based in Ohio, he moved to Columbus in 1867 and teamed up with a local businessman to found the Columbus Watch Company two years later.

In the cellar of a downtown building, he worked from Swiss blanks. In 1874, he filed his first patent for a safety pinion for pocket watches that protected the movement from damage if the mainspring broke. Under the eponymous brand name and a number of others created over time (about 130 registered names, including the famous "Precision"), Gruen initially produced good quality pocket watches. These quickly meet a real success allowing the development of the company with various partners. Soon, the 150 employees of Gruen produced 300 watches per day.

However, the business ended up going badly and Dietrich Gruen, in disagreement with his partner, was forced to leave the Colombus company in 1893. A setback that soon looked like an opportunity: the following year, he set up a new business with his son, Frederick, who had completed internships at Glashütte in Germany. Under the name of D. Gruen & Son, then Gruen Watch Company from 1898. Despite Dietrich's death in 1911, the business was still successful and Gruen even obtained contracts to supply the American army.

In 1917, Gruen moved to Cincinnati, Ohio, where he settled downtown for a while before building a factory on the heights, in a quiet area conducive to watchmaking. It was in this spectacular building, named Time Hill and inspired by a corporate headquarters discovered in Belgium, that the majority of the brand's models were produced between 1921 and 1958.

In a speech to a group of businessmen in the 1920s, Fred Gruen said, "Our goal has always been, ever since I first floated the idea of the Guild, to promote the ideals of old-fashioned corporations, of quality and craftsmanship, of doing useful things in a beautiful way, in an ideal setting. We believe in the application of art to industry, as evidenced by all our activities, from building a factory whose architectural style suggests craftsmanship to making the most beautiful watches with the greatest possible precision. »

At Time Hill, Gruen receives the blanks ordered in Switzerland, cuts the stones, manufactures the cases and bracelets, carries out assembly, finishing and adjustments, and even launches a service to repair damaged watches. Business was prosperous enough for the company to withstand the Great Depression, and in 1935 the famous Gruen Curvex, the rectangular watch with the curved shape that fits so naturally on the wrist, was released. 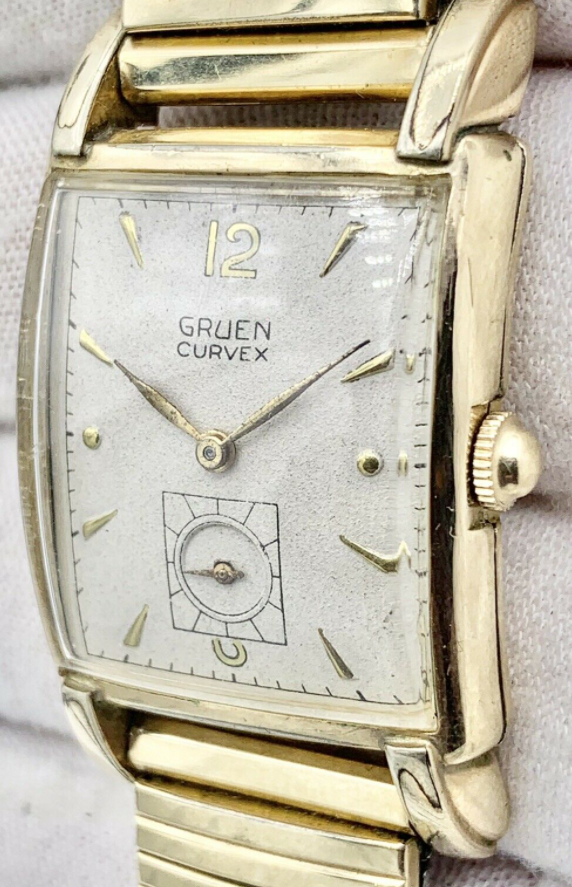 Interesting watches are coming out of the factory, such as the Gruen Super-G powered by a 422 RSS caliber. This astonishing model features a 24-hour time reading with a jumping hour system: the dial is pierced with twelve windows revealing a plate that shifts twice a day to alternately display the first twelve hours and then the last twelve. This device will then be used on other references of the brand with calibers N510 CA and N510 SS.

During the Second World War, Gruen contributed to the effort by converting its production facilities to manufacture precision instruments (meters and gauges) and instrument panels, as well as a watch that became emblematic, the Pan American Watch, supplied to the U.S. Air Force and then offered to the general public.

Fred Gruen's death in 1945 marked the beginning of a long period of decline. The brand had difficulty resisting the influx of Swiss watches on the American market, despite the development of a 21-jewel movement made entirely in the United States.

Sold in 1953, the family company experienced five years of severe turbulence. Between management errors and shareholder disputes, Gruen is tossed around, gets into debt, reduces its workforce, liquidates its means of production and even destroys its archives... Moribund, Gruen finally finds a New York buyer in 1958 and becomes Gruen Industries. This allowed the brand to survive by producing mechanical watches for town and diving until the quartz crisis finally took over in 1976.

Along with Hamilton, Bulova and Elgin, Gruen was one of the largest watch manufacturers in the United States.